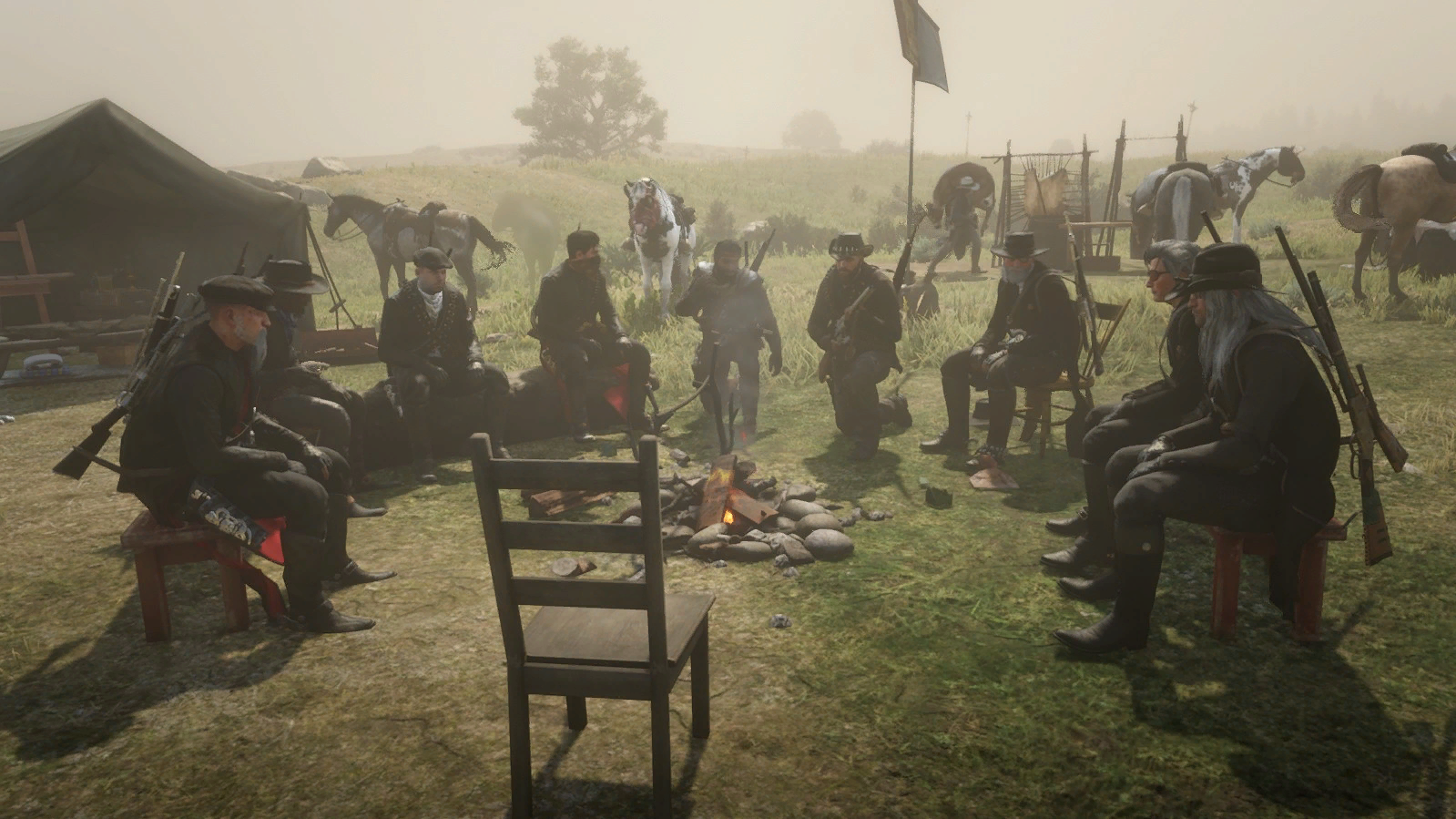 Dedicated to having fun, making friends, and riding the range in Red Dead Online. Numbering well over 200 active members, this is a crew that enjoys multiple events every week, has a robust system of ranks and rewards, and has increased the enjoyment of the game tenfold for its members. Led by Superduke and a fantastic team of moderators, the Regulators are going strong and are looking forward to a bright future.

This group of people has its own story, which now unfolds daily, but with all such stories there is a beginning, simple and humble, filled with hope, joy, and dreams, tempered with trials and challenges.

Prior to the PC launch, Superduke had first played Red Dead Redemption 2 on console with his uncle, player tag of Unorthodox. When the PC launch occurred, Duke and Unorthodox both switched over to the PC version. After playing a little of the story, they dove into the multiplayer, splitting the roles between them and figuring out how they worked.

It was at this time that Duke wanted to join a crew with cohesion and teamwork, similar to the crew he had played with in GTA. Unorthodox countered with the idea to start their own crew. Duke agreed, but stated that he would help to make it, but that Unorthodox should lead it. An agreement was made, and the two rode out, seeking those players who would ride with them through thick and thin. The very first player to join them was Hashtag. They were soon joined by Lionheart, and then by AFoolishMan.

At this point, Unorthodox had volunteered his Discord server as a home for the new group. Also, the group debated a name for the crew, with the title of The Immortal Regulators being chosen – the tag was IMMR. Along with this, an emblem was created for the crew on Discord, and members like “Doc” ElWimp, and Minna (the first female member) joined. They were soon followed by CeeZee, Frank, and Marko.

More members joined and soon the crew numbered 20 in size, with Duke suggesting that events should be held. One such event was the very first Fight Club, held at McFarlane’s Ranch.

"To the Booze, to the Crew, and the gun fights we never lose."

By mid-December, Duke had started recruiting on Reddit. The number of applicants increased greatly, with Duke processing all of the applications himself, via DM’s in Discord. Notable members that joined at this time included Born2late, CeeZee and Littamer. Due to the crew growing larger, Littamer suggested that Duke elevate some trust-worthy members to the position of moderator. As such, AFoolishMan, Frank, Hashtag, and Littamer were appointed the very first mods for the Immortal Regulators.

Recruiting posters were sent out to sites like Reddit, which paid off with even more people applying. Due to the increase in applications, Duke took an idea from a previous crew, and created a buffer Discord, called the Stables. At the same time, CeeZee pitched in and set up the Discord with additional channels, role reacts, and the like. The Lawmen role had been created, and the crew colors had been picked, with much debate over white hats versus black hats. The rank system had been put into place as well.

As the holidays came and went, along with the introduction of the Moonshiner role, things began to shift a little within the new 100 member crew. Littamer had started the Corsets Club, which saw in increase in the number of female members joining. Moderators were meeting weekly to plan events and handle crew business. Saturday had become the main event day (although there were still no initiation ceremonies yet). At this time, Unorthodox had largely stopped playing, but people like TomtheMilkMan, ASAPDanny, Futurecasual, Licslics, and ChristheIndolent had come on board by February of 2020. Marko had also stepped up to take on the role of Moderator at this time.

By April, the crew had run into some challenges. It was at this point that Duke decided to take a hiatus from the game and the crew, to refocus on life and work and related priorities. Over the summer of 2020, the crew was more structured as a group of friends, with very few rules being followed, but with events being a high point for everyone. By mid-July, however, Marko and Hashtag let Duke know about the updates to the game, including legendary animals, which piqued his interest.

Upon returning to the crew, Duke saw that tensions between existing mods were high – and with several mods departing, Duke once again took on the mantle of leadership. New members had joined during his hiatus – including, Grumpyumpy, Bea, Markie, Hanzo, Cotton, Vic, Waco, and Wax. Tom stepped up into a moderator position. Recruiting started up again.

By late September, Duke and the moderators felt that the crew would benefit from a new Discord server, where Duke could handle all of the tech requests directly, instead of relying on Unorthodox. Valence and Romanthicc designed the new Discord, and in early October of 2020 the migration to the new server occurred, with members like Waco, Unster, and Nava also becoming moderators.